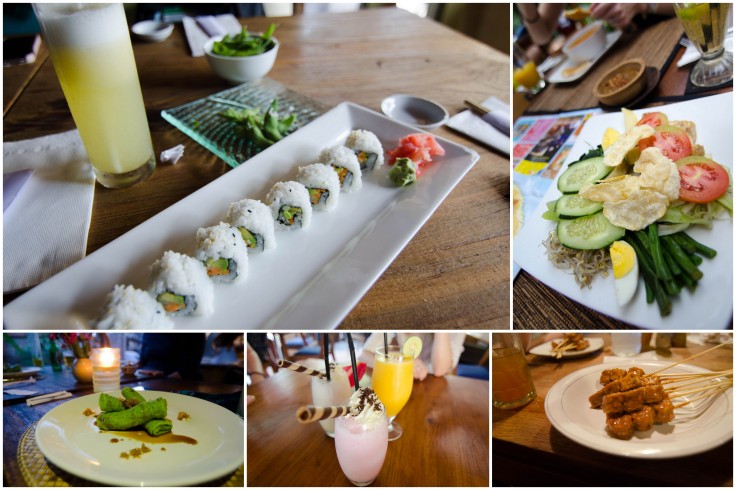 I may have spoken a little harshly about some aspects of tourism in Bali, but one thing the island–and Ubud in particular–does especially well is food.

Since Bali is such a popular holiday destination for people from all over the world, it seems to have adapted its culinary scene to suit a wide variety of tastes. The spiritual aspect of Bali has also influenced the cuisine by ensuring that vegan and all-natural food can easily be found.

Josh and I happily ate our way around the island. It can sometimes be just slightly more difficult to travel as vegetarians, but not once on Bali did we feel starved for options.

Our first favorite was a tourist bar/cafe that we went to because it was just a short walk from our villa near Ubud. With delicious Indonesian and international food made from local organic produce, Fly Cafe was already doing well in my book. And then came dessert. Let’s just say that I coerced Josh and Molly into going back there late one night just for another piece of the “island’s best key lime pie.”

After seeing the Bat Cave Temple, it was time for lunch, and our driver asked if we would prefer to eat at one of the local restaurants off the main road or at a place by the ocean in the fishing village of Candidasa. Obviously, we chose the latter. We were dropped off at the front of a resort, and walked along a quiet pathway of guest bungalows to get to the seaside restaurant. 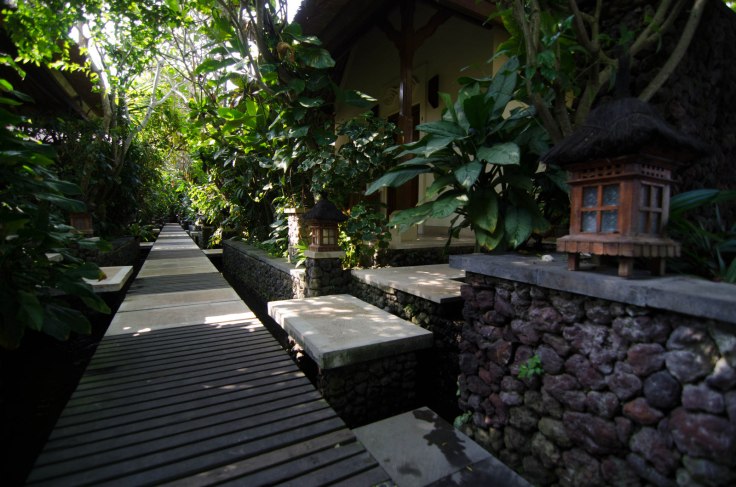 Rendezvous had several veg choices, and Josh and I each opted for an overpriced veggie burger. The defining feature of this restaurant, however, was not the food but the setting. The resort was quiet and relaxing, and we enjoyed looking out at the sea while we dined. It was definitely worth the experience. 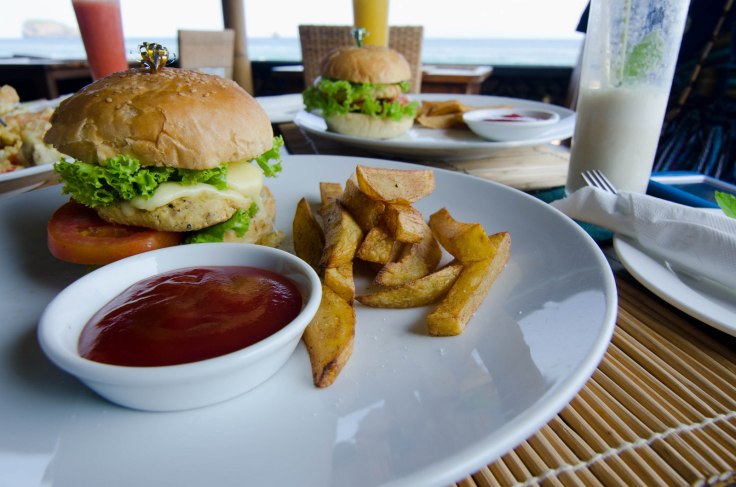 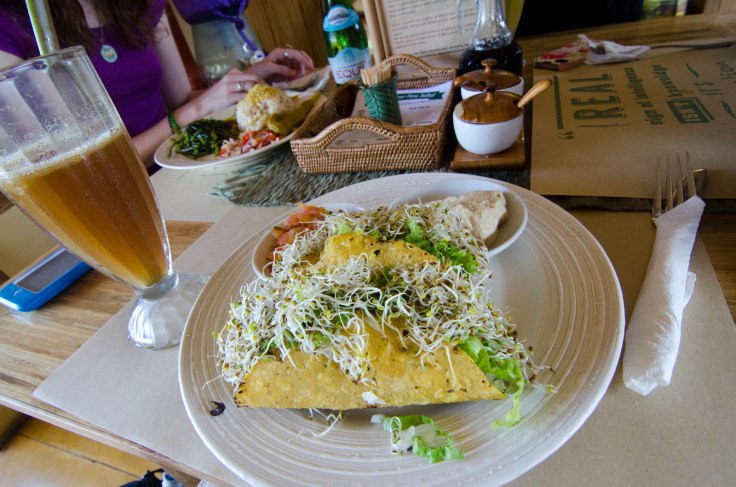 As I flipped through my Ubud welcome booklet on our first day in Bali, I noticed an advertisement for this cafe/market.

The atmosphere was nice, and we enjoyed the free wifi, the creative placemats, the giant case of vegan pastries, and the impossibly huge menu. Though slightly overpriced because of its novelty of being an all-veg place, I felt like Down to Earth was definitely worth it and still cheaper than a US equivalent. 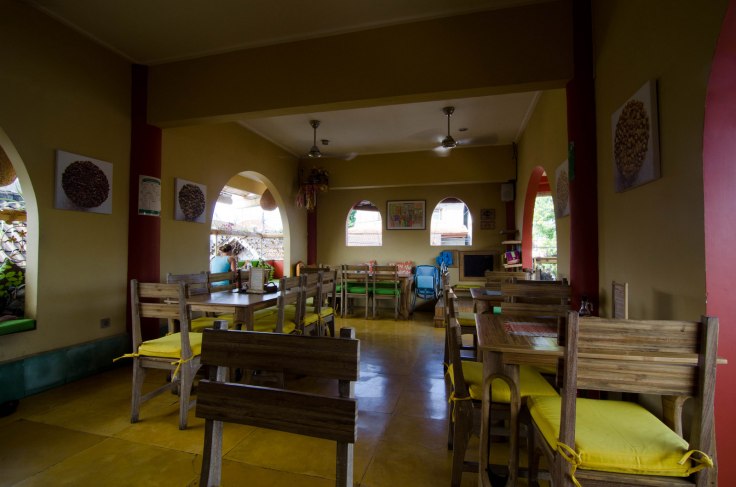 Downstairs was a shop that carried a lot of fair-trade, vegan, and all-natural products such as health supplements, specialty food items, and even some local/ethical souvenirs.

Also, unlike many other restaurants in Bali, Down to Earth had a no-smoking policy, which gave Josh and me a welcome break from the smoke allergies that we experienced almost nonstop during our trip. 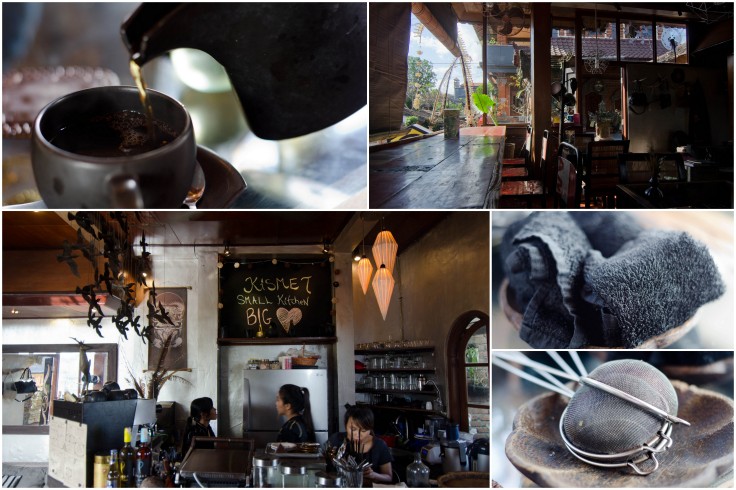 This was another place that I first saw in my Ubud welcome booklet, and since it advertised not only a huge vegetarian menu, but also an afternoon high tea, Molly, Josh, and I were all very interested in checking out this cafe/boutique.

The first time we went, we ordered breakfast and drinks. Kismet’s menu was so enticing, with plenty of fresh and healthy meals in addition to some splurge-worthy options (such as several flavors of delicious vegan ice cream!), that we came back two more times over the next few days.

The breakfast sandwiches came with a side salad, and the fruit bowl that Josh ordered was massive. I was also impressed that when you order drinks, they ask if you want fresh milk, rice milk, or coconut milk. They also bring a few pitchers containing different kinds of sugar. And while we waited for our food each time, we were brought a plate of small towels that were soaked with cold water, which was a really amazing touch.

The cafe is tiny, and I’ve never seen such a small kitchen, but we saw as many as five workers squeezed together back there, cooking up fresh meals for our enjoyment, so I guess their system works!

Just like Down to Earth, Kismet had a great atmosphere–free wifi, smoke-free, interesting decorations, and board games. We played Scrabble the first time that we went, and when we went back for our afternoon high tea, we ended up playing Cards against Humanity for close to four hours.

A note about Kismet’s High Tea: You must make a reservation 24 hours in advance. At about $9 USD/person, the high tea will get you a pot of tea per person, several delicious vegetarian finger sandwiches along with a simple salad, scones with clotted cream and jam, and other sweet treats, all served on a three-tiered cake stand. Even though we’d skipped lunch, there was more food than we were able to eat at once, but it was a slow afternoon, and they didn’t mind that we took several hours to enjoy the meal. 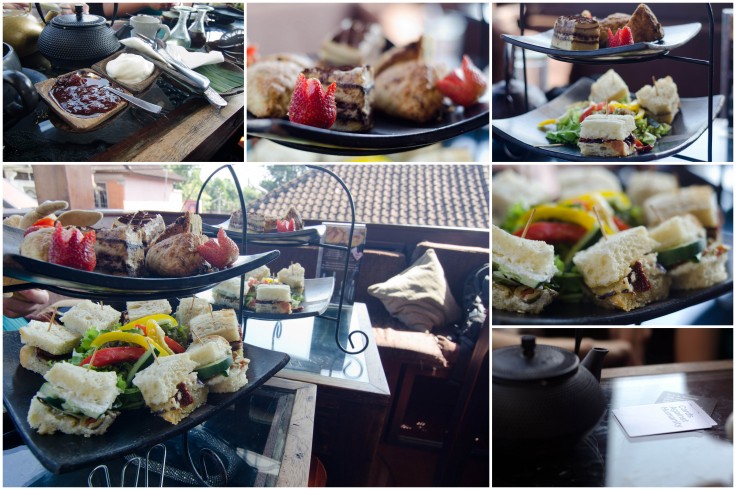 I absolutely loved Kismet, and I think I’m correct in saying that it was by far everybody’s favorite of all the places we ate in Bali.

The best brownie in the world

The inside of this Kuta restaurant looked really funky, and we happened to pass by as we were starting to get ravenous, so we stopped for dinner. Unfortunately, Nebula’s vegetarian dishes were pretty awful, and as we choked down our bland meal, Molly, Josh, and I repeatedly wondered how this place stayed in business. (The TripAdvisor reviews paint another picture of this place, so maybe we just visited on an off night.)

But when we ordered the brownies for dessert, we changed our minds. With gooey icing and a slight caramel flavor, these brownies were quite possibly the BEST dessert I have ever eaten anywhere. I fully plan on returning to this place just for another brownie (or ten!) next time I’m in Bali.

Ultimately, I feel that Bali is a worthwhile destination for its food alone, and people with dietary restrictions have nothing to fear when they visit!

*All photos were taken by Josh.

Have you been to Bali? What were your best meals there?