Early last month, my family was discussing bucket list destinations, and my sister Maggie mentioned that she really wanted to go to New Orleans. I kept that in the back of my mind, thinking that it might be a fun sister trip to have someday.

After realizing that I had one free weekend left at the end of my heavily overbooked summer break, I decided that I’d make Maggie’s dream destination happen sooner rather than later.

So a few weeks after the above discussion, we were spending our Friday night driving from my parents’ house in Alabama through Mississippi. We’d never been to Mississippi, and our first stop in the state was memorable. Maggie really had to use the bathroom, and after pulling over at several gas stations that were already closed by 9:30pm, we finally found one. I sat in the car and checked my phone while I waited for her to return.

Suddenly, she ran up to the car, tore open the door, and dove back into the passenger seat. “DRIVE!” she shouted. I started my car and pulled away from the gas station. “What’s wrong?!” I asked.

“There was a man with a–” she paused to catch her breath. “A man with a mullet!” she cried out hysterically.

“You’re freaking out over a bad haircut? I thought you were gonna say he had a gun or something.”

“Well yeah, this is the South, everyone has guns,” she responded, and then we got straight back to singing along to her Panic! at the Disco playlist.

After stopping in Hattiesburg, Mississippi, for the night, we woke up on Saturday morning and drove into New Orleans. As we entered the French Quarter, Maggie rolled down her window and leaned out to soak up the city while I focused on trying not to hit pedestrians who were already drunkenly wandering the streets at 11am.

Maggie’s main priority was partying on Bourbon Street that night, so I planned the rest of the day, and you’d better believe that the Audubon Insectarium was our first stop. Since Maggie didn’t want to explore on her own, she came in to the insectarium with me and watched me nerd out over all the lovely bugs. I think she might have been surprised at how cool some of them were.

The first thing that caught our eye was a dancing cockroach, and even Maggie had to admit that it was pretty cute! 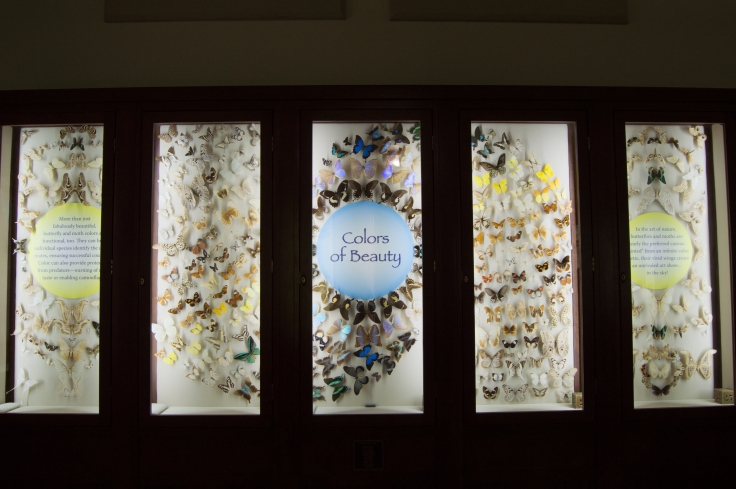 When my friend Meredith found out that I was currently in insect heaven, she texted me “ARE YOU EVEN STILL ALIVE?” No, I was so dead from overexcitement, and this snapchat is what Maggie sent to her in reply. 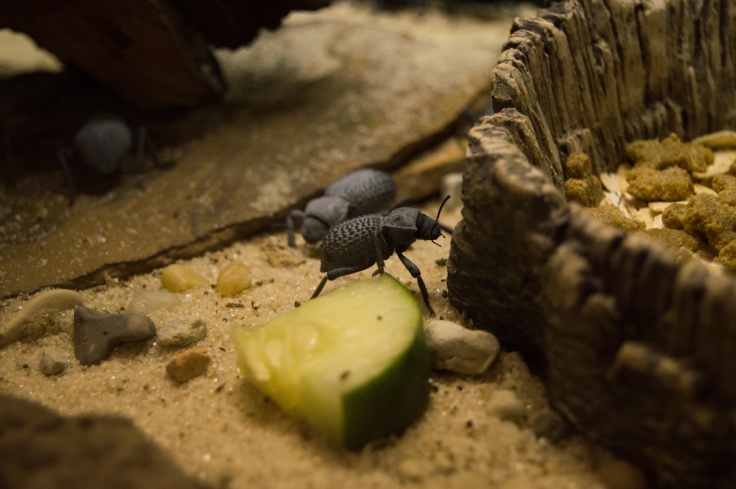 I loved all the adorable beetles, like the above death-feigning beetle. But my favorite bugs of the day by far were the colorful frog beetles.

I left a piece of my heart with the frog beetles and then we went back outside to explore the French Quarter together. I loved all the old architecture and the colors, and I was happy to see so many pride flags everywhere. Even though I usually rely on my phone for directions, I decided to navigate without it on this trip and managed to get us where we wanted to go without any issues. 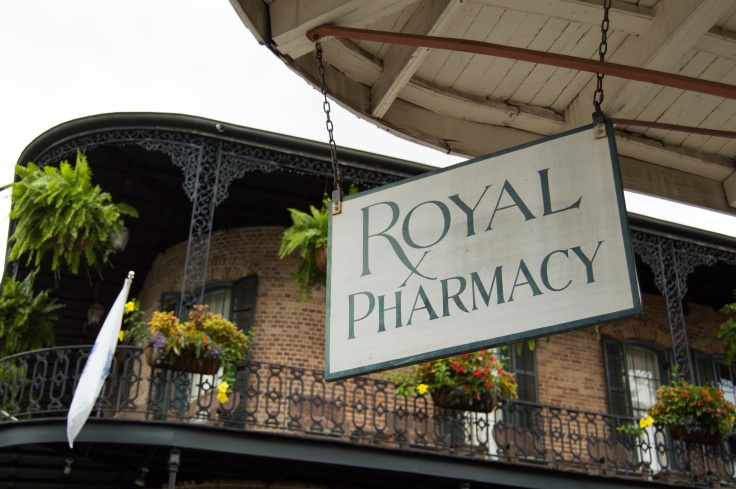 Of course, we did have to stop at Cafe du Monde to get a picture of Maggie eating beignets.

And then we got a few other pictures of Maggie being cute. 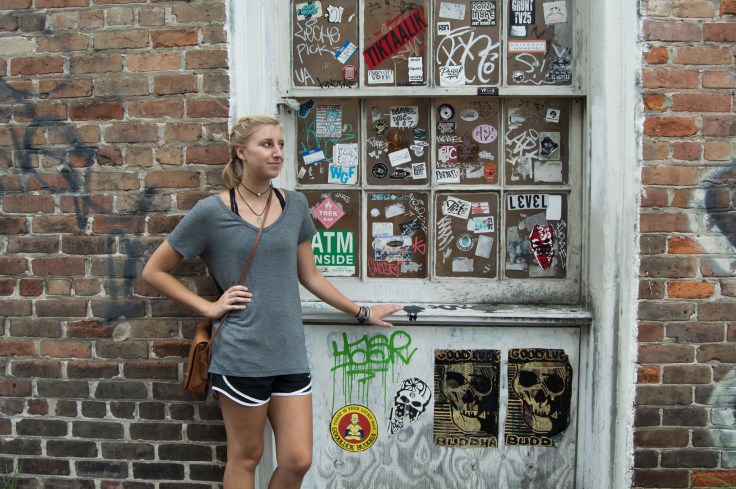 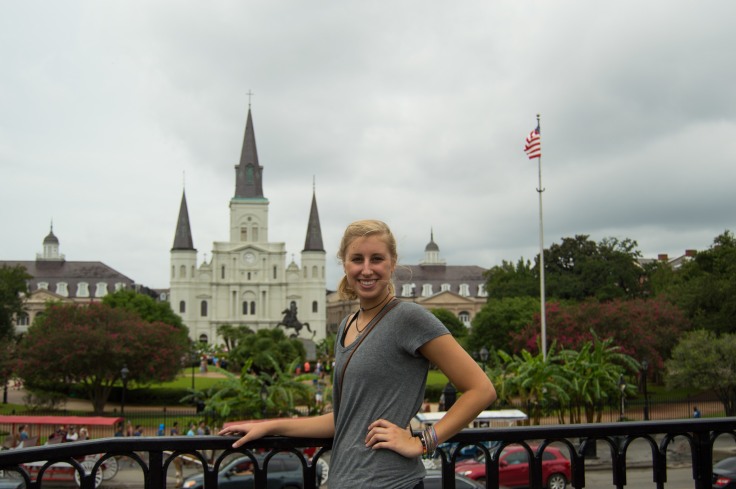 We headed to our bed and breakfast early afternoon and were absolutely delighted by it. At just over $100/night, Rathbone Mansion was the cheapest place I could find that was within walking distance of Bourbon Street, and we both felt this charming place was well worth it. 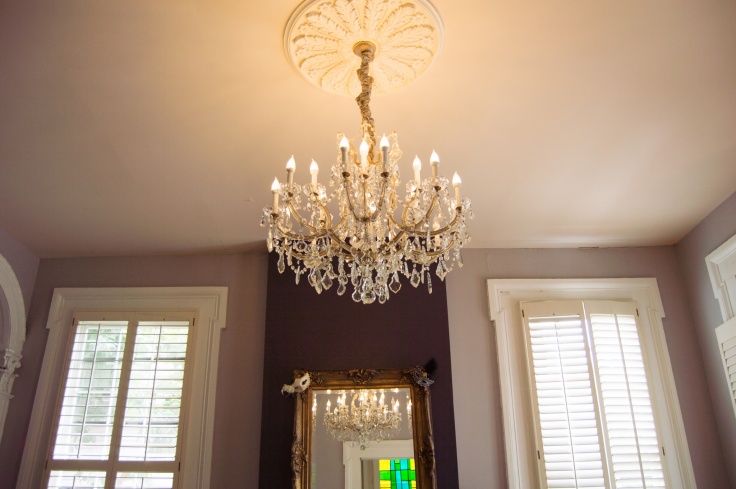 We had a little downtime to explore the property, and then we went back out to go shopping for an outfit that Maggie could wear out that night. Then we came back to our b and b so that we could rest a little bit before getting ready.

For me, “going out at night” usually involves putting on my sneakers, grabbing my camera and my tripod, and heading to a Disney park to photograph the fireworks. So it was a lot of fun to participate in Maggie’s idea of “going out at night,” which involved spending ages on hair and makeup (and then even more time taking selfies of ourselves looking cute together) before heading to Bourbon Street. 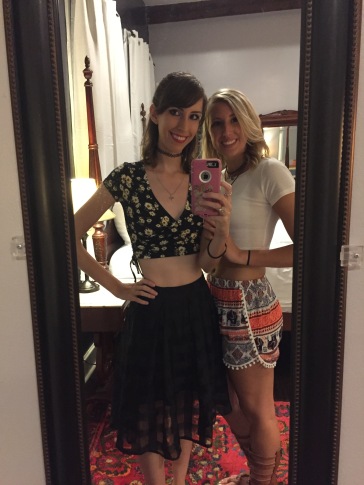 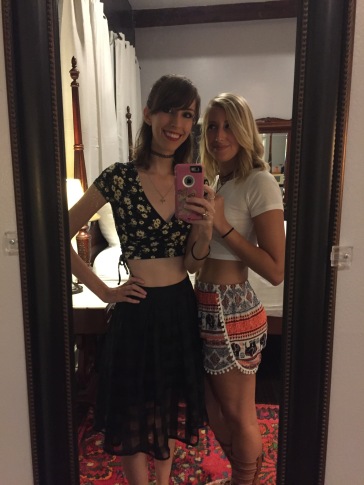 A little background: Maggie goes to a lot more parties than I do. She probably had more alcohol on her 21st birthday earlier this year than I’ve had in my entire life. Other than a small drink in Vegas this summer, I hadn’t had any alcohol since a sip of champagne on my own 21st birthday (4 years ago!). So I certainly didn’t plan to get drunk tonight…

When we arrived, I was totally overwhelmed by all the people and noise, but Maggie was in her element, and led me along all the bars of Bourbon Street, stopping to chat with a few interesting strangers along the way.

Eventually, we saw a bar that sold a drink that Maggie’s friend had strongly recommended: the Hand Grenade. We walked around drinking that and soaking up more of the Bourbon Street craziness. Eventually we got to the end of the street–or at least the exciting parts–and turned around.

We walked until we got back to the same bar, where we decided to get a refill on the fruity drink. I thought that the reason my mouth hurt every time I took a sip was because the drink was frozen, but I eventually realized it was from the sheer amount of alcohol that was in these things. What we didn’t know is that Hand Grenades are designed to knock you down, so that second drink hit us both hard.

Fast forward a little bit, and we had met a sweet group of guys that we ended up spending the rest of the night hanging out with. We spent a while chatting with them in the street, as people on the balcony above us threw down Mardi Gras beads, and eventually we went into a quieter little bar so that Maggie and I could use the bathroom and we could chat to our new friends a little more.

There were some very emotional and perplexing moments throughout the night, but one of the big moments that I still can’t stop thinking about was seeing a mythical cockroach. The second time Maggie and I went to the bathroom, there was a GIANT cockroach in my stall that was brown but had white patches all over it. This was during the short period of time that I couldn’t even see straight, so I really didn’t get a good look at it and would have convinced myself that it was a hallucination, except for the fact that it crawled into Maggie’s stall and she saw it too!

Me: MAGGIE THERE’S A GIANT BEAUTIFUL COCKROACH IN MY STALL.

Me: No, I love cockroaches! This is the best moment of my life! Maggie, he’s coming to say hello to you!

Maggie: Oh my gosh, I see it, ewwwww!

Me: Don’t worry, it won’t bite you, it just wants to be friends!

Maggie: That thing is huuuuuuge!

That wasn’t the only cockroach we saw that night (I drunkenly tried to pick up and cuddle with one that I found at one point), but it was by far the most memorable. I’ve spent a significant amount of time trying to figure out what species it was, and neither Maggie nor I were in our right minds enough to have noticed any identifying features. We’ve come to the conclusion that either we had a joint hallucination, it was one of the giant cave cockroaches that escaped from the insectarium, or it was just a regular giant cockroach that somebody had painted white splotches onto.

Some mysteries are never meant to be solved.

Our friends walked us to our b and b to make sure we got back safely, and Maggie and I climbed into our king bed sometime after 2:30am, giggling about what a great time we’d had. She ate some potato sticks and gushed about how excited she was to come back here with her boyfriend someday, while I looked through the pictures we’d taken that night and gushed about how much I liked one of the guys we’d met even though I’d never see him again.

A few hours later, my internal alarm clock jolted me awake, and I sneaked out of the room to go on a sunrise walk while Maggie slept a little later. 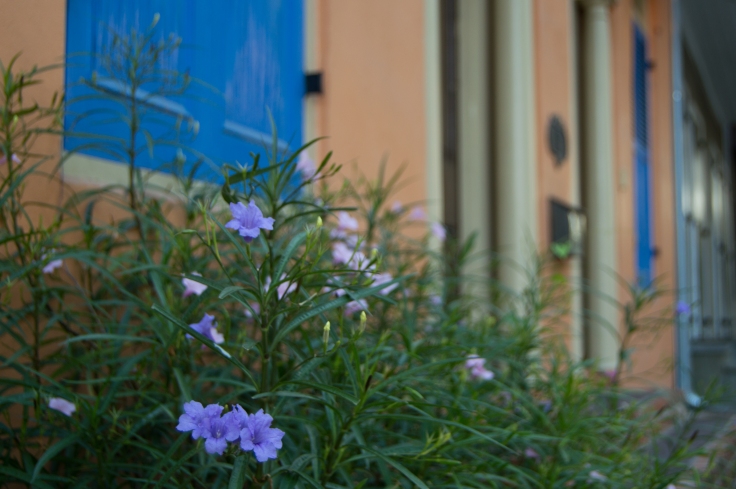 Surprisingly hangover-free, the two of us walked back to Cafe du Monde so Maggie could order some beignets to take back to our siblings, and then we got back in the car and drove the 7 hours back to Alabama, thankfully avoiding any encounters with mullets as we passed through Mississippi.

I’m so happy I got to see so many cool bugs in New Orleans, but I’m especially happy that my sister and I had such a blast on our first trip with just the two of us. I can’t wait for our next adventure, Maggie!